After two seasons and an interlude chapter, The Walking Dead: Michonne represents Telltale Games’ fourth foray into Robert Kirkman’s seminal undead epic. At this point many have come to know what to expect from the developer’s work —  branching stories driven by harrowing decisions occasionally interrupted by stretches of hit-or-miss combat.

For better or worse, The Walking Dead: Michonne sticks to that formula across its three episodes. It’s incredible to think that this framework had an entire industry heap praise upon Telltale just three short years ago feels so run of the mill now, but think of how much they’ve churned out since 2013. The Walking Dead Season One, The Walking Dead: 400 Days, The Wolf Among Us, The Walking Dead Season Two, Game of Thrones, Tales from the Borderlands, and Minecraft: Story Mode all apply virtually identical mechanics, even if most of them are very different from each other tonally. It is what it is at this point.

Under different circumstances, I might have felt perfectly fine with skipping anything less than another full season of The Walking Dead — how an engine designed to run on PS3 and Xbox 360 still chugs on their next-gen counterparts, I’ll never understand —  but it’s Telltale’s great fortune that Michonne is one of the most compelling characters in all of comic books. Conversely, we’re fortunate that they’ve done her great justice here. 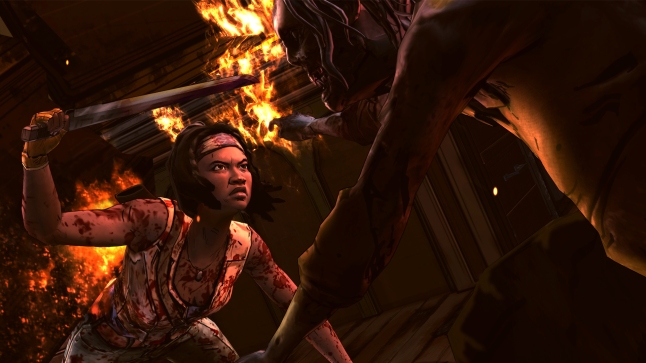 Previous entries in Telltale’s Walking Dead have all been stories that are meant to be parallel to Kirkman’s work — Rick and his group are over here, but Lee and Clementine are over there — but Michonne is rooted firmly in the comic’s canon. Those who have read up were taken aback by the sudden three-year gap between issues 126 and 127 following Rick’s war against Negan, and most notably Michonne is no longer a part of the group; when she does finally reappear in issue 139, we learn that she’s been away at sea with a different crew for quite some time. The Walking Dead: Michonne sets out to show what that’s all about.

This mystery group is comprised of a small handful led by a boat captain named Pete, a man prone to helping people whether the rest think it’s a good idea or not. His empathetic nature leads him, as well as his group, to investigate a distressed radio call from an old ferry. There he and Michonne meet a pair of siblings who are carrying stolen goods, when a third group — from whom the goods were stolen in the first place — finds them. One big misunderstanding later, Michonne, Pete, and the brother-sister pair are all brought in to answer for their crimes.

From here, the story hits story beats that will be familiar to Walking Dead aficionados: our protagonists have stumbled upon a well-off group, have managed to piss off its iron-fisted leadership, are captured, and escape only to have to face the big bad in some kind of showdown. Here, the bayou community of Monroe and another pair of siblings, Norma and Randall, fill in the blanks in our zombie mad lib. The overarching story is disappointingly formulaic, and the only real satisfaction comes from the possibility of seeing some especially bad people to their appropriately gruesome end. 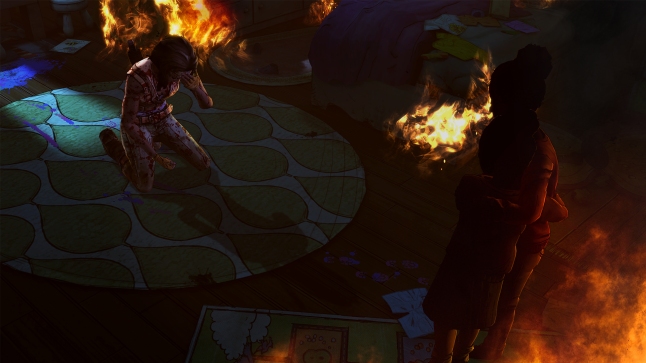 As she is wont to do, Michonne manages to save the whole affair, but here she does it with some truly meaningful character growth rather than with sharp objects as we finally shine some light on the past of one of the most mysterious people in mainstream comics. Before The Walking Dead: Michonne, we’ve only gotten bits and pieces. We know that she’s lost people — I mean, the comics introduce her leading her jawless, armless zombie brother and boyfriend on leashes, so we know she’s seen some shit. We also know that she had two young daughters that she hasn’t seen since the outbreak, and that she doesn’t know what ultimately happened to them.

What we haven’t really seen before is how the weight of all this loss affects any one of these characters. Putting the focus on someone like Michonne, who we usually see as a stoic badass that seems to keep her cool in impossible situations, and watching her struggle with her grief truly is heartbreaking. The pain that comes from losing a child is something that never completely fades for the parents that have suffered such a tragedy, but Michonne’s is compounded by a lack of closure. She left her kids with her estranged husband and never got to see them again, and the world around her frequently triggers hallucinations in which she sees her daughters standing either nearby or in the distance. She pleads for their forgiveness, and the fact that there was nothing that she could have done for things to be different does nothing to alleviate her grief. Her children don’t speak back to her.

So while the story and action are very paint-by-numbers as far as the pairing of Telltale and The Walking Dead go, The Walking Dead: Michonne expands on a fan-favorite in ways that neither the comic or the show have managed to do so before. As a three-part miniseries, the shortcomings aren’t enough to outweigh some of the developer’s best character work to date.

One thought on “The Walking Dead: Michonne Review”